On this page, you will find all the information on the topic: The Hamer's Compass 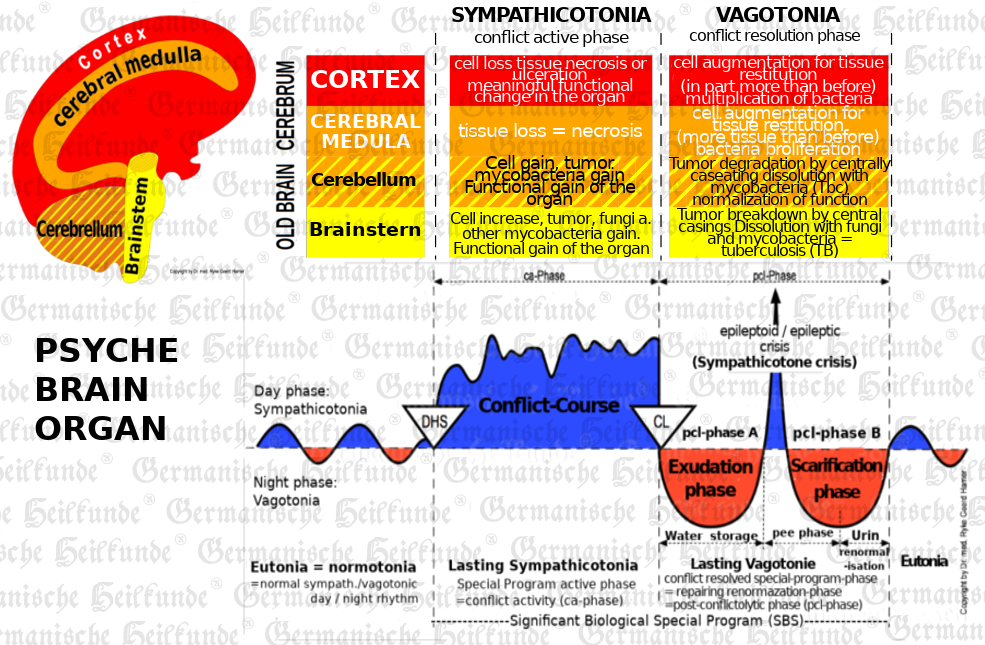 Time is plotted on the x-axis. Monday, Tuesday, Wednesday … Or February, March, April …

In the y-axis up, we have plotted the stress part’s intensity, the sympathetic nervous system.

The y-axis down, we have plotted the resting part’s intensity, the vagus (parasympathetic).

In this section, we are absolutely healthy. The typical day/night rhythm is present. During the day, we are sympathicotonic and in stress with cold extremities. At night we are vagotonic and at rest with warm extremities.

With the Dirk-Hamer-Syndrom, our vegetative nervous system switches instantly into sympathicotonia, again with cold extremities. As an individual (= inseparable unity between our body and our thinking. If one disappears, the other disappears.) the following happens to us now:

We are in a quasi-permanent day phase, now, however conflictively! Compulsive thinking remains, and we dream about our conflicts. The HH remains in the shape of a shooting target. On the organ level, conflict mass builds up, i.e., cancer becomes bigger and bigger.

You can resolve a conflict in the next moment, but you can also resolve it months from now. This is entirely individual. According to the conflict’s duration, the conflicting mass and correspondingly long will now last the healing phase.

With the conflict’s resolution, our vegetative nervous system inevitably and instantly switches to permanent rest (vagotonia), with correspondingly warm extremities.

Now our brain turns on the microbes associated with the tissue, because they now have to do their job as “surgeons”.

We are in a quasi-permanent night phase but now like after a burdensome work (depending on the mass of conflict). Now we feel limp and tired. Now we are “sick”!

The microbes break down the tumors that are now no longer needed or rebuild the previously created holes.

This process takes place with swelling and pain (inflammation). Likewise, the HH deposits edema, and the swelling in the brain becomes larger.

To stop this process, Mother Nature has built in the crisis. With momentum, one is pushed again towards health (eutony) by momentarily intense sympathicotonia. The crisis always proceeds with cold extremities and constriction of the vessels. The urinary flood phase begins with the crisis, whereby the previously-stored water (edema) is unwound again. Often these are the only noticeable symptoms of the crisis. However, there are also fatal crises (depending on the particular program and the conflict’s mass).

After the crisis, one falls back into vagotonia, again with warm extremities. From now on, it goes upwards towards health. After the conflicting mass has been worked off, one is almost as good as new again. Scars remain in the brain and on the organ level.