Uterus - Symptoms according to Germanische Heilkunde®

On this page, you will find all the information about the topic: Uterus 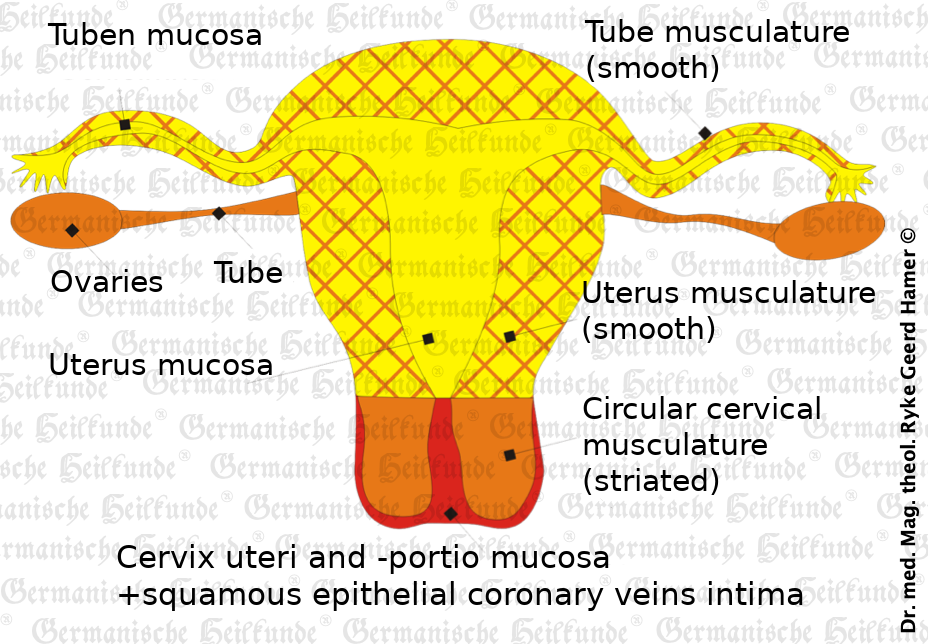 The endometrium is the mucosa of the uterus, in which the fertilized egg is implanted.

Fluor Vaginalis is the tuberculous healing phase either from the lining of the uterus or the fallopian tubes, both an ugly, semi-genital conflict or a conflict of loss.

The uterus has the uterine mucosa (glandular tissue) and the squamous epithelium at the cervix uteri and -portio mucosa.

The PAP smear is taken from the squamous epithelium of the cervix. If altered cells are found, this indicates either the active or the healing phase after a sexual frustration conflict.

Period pains require a sexual conflict in the coronary vein relay AND any territorial constellation with manic emphasis. The more manic the woman, the more severe the period pains.

Usually, the girls get their menarche at the age of 11. If it is coming sooner or later, there is usually a sexual conflict. In nature, there would be no menstruation, because the female would be pregnant with the next ovulation.

Vaginal itching is the healing phase following a separation conflict associated with the vagina (squamous mucosa).

Vaginal itching is the healing phase following a separation conflict that has been associated with the vagina (squamous epithelial mucosa). It is not caused by fungi.

Lubricant bleeding is the healing phase after an ugly semi-genital conflict with a male person concerning the lining of the uterus.

Vaginismus (vaginal spasm) is the crisis (epileptic seizure) of the striated muscles of the vagina.

The white discharge is associated with the healing phase of a separation conflict in the vagina, concerning the squamous epithelial mucosa. Since it belongs to the outer skin scheme, the healing phase is painful (itching).