Stomach - Symptoms according to Germanische Heilkunde®

On this page, you will find all the information about the topic: Stomach

The stomach with its glandular tissue has the morsel as conflict content. The small curvature is lined with squamous epithelium on the stomach, controlled from the precinct area of the cerebral cortex. 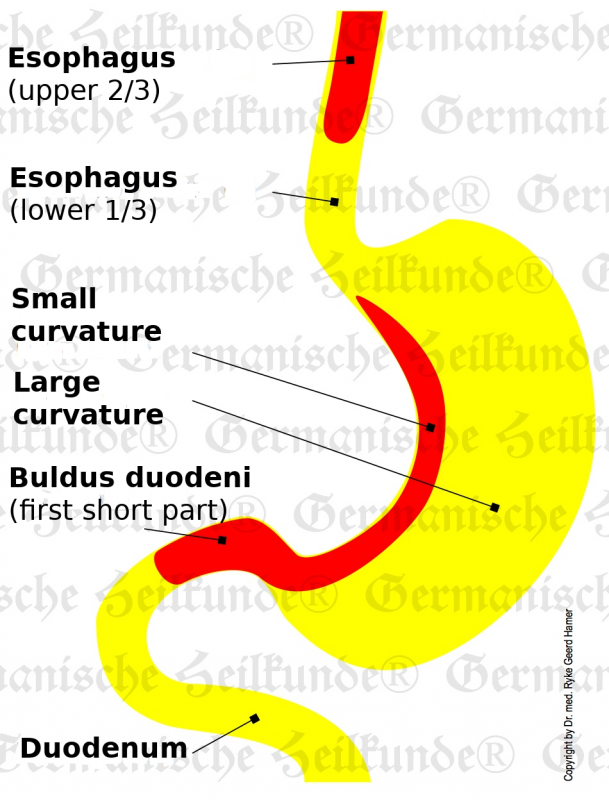 Vomiting is typically the crisis of the small curvature of the stomach.

Gastritis is the hanging cure of the small curvature of the stomach, squamous epithelium, pharyngeal mucosa scheme. The cause is a male territorial anger or female identity conflict.

Helicobacter pylori (bacterium) is suspected in conventional medicine to cause stomach ulcers. However, the stomach ulcer is squamous epithelial mucosa and ulcerates in the conflict-active phase. In the healing phase, the ulcer is replenished with swelling, but without microbes (the viruses do not exist). Bacteria can, however, certainly co-react in the healing phase if the connective tissue (supporting tissue present everywhere) has co-reacted, e.g. in the case of a deep ulcer.

Stomach bleeding is the crisis after a male territorial anger or female identity conflict concerning the small curvature of the stomach (squamous epithelial mucosa). This crisis proceeds with gastric epilepsy, pain (pharyngeal mucosa), and an absence.

The stomach ulcer always occurs at the small curvature of the stomach, which is lined with squamous epithelium. Therefore, the peptic ulcer cannot have anything to do with the gastric acid, which logically is mainly located at the bottom of the stomach. The cause is rather conflicting territorial anger (male) or a female identity conflict.

Stomach colic is the crisis (epileptic seizure of the striated muscles + absence + pain) after male territorial anger or female identity conflict concerning the small curvature of the stomach.

In the case of stomach cancer, one has to ask again. Is it the ulcer of the small curvature’s squamous epithelium, or the flat-growing (resorptive) or cauliflower-like (secretory) growing adenocarcinoma of the glandular tissue? These are two different types of tissue and, therefore, different SBSe.

The small curvature of the stomach is covered with a squamous epithelial mucosa (red group), which belongs to the so-called pharyngeal mucosa scheme. The pharyngeal mucosa scheme hurts in the conflict-active phase (territorial anger or identity conflict) and hurts in crisis. The SBSe of the glandular tissue (yellow group), on the other hand, can often proceed without pain.

In the glandular tissue (yellow group) we have cell proliferation in the conflict-active phase after a morsel conflict. If the aim is to remove the stuck morsel, a cauliflower-like tumor develops (secretory quality). If the aim is to better absorb the morsel, a flat-growing tumor develops (resorptive quality). The thickening of the stomach wall is about a morsel that you want to absorb but cannot.

The small curvature of the stomach is lined with squamous epithelium, which belongs to the pharyngeal-mucosal scheme (pain in the active phase and in crisis). The cause is male territorial anger or a female identity conflict.