Musculature - Symptoms according to Germanische Heilkunde®

On this page, you will find all the information about the topic: Musculature 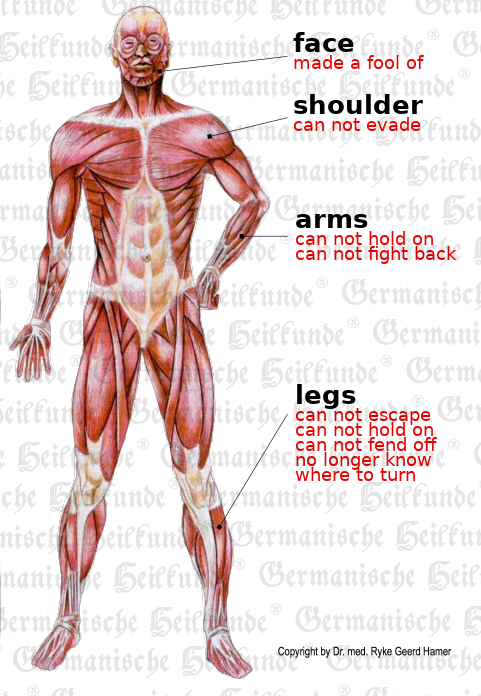 Amyotrophic lateral sclerosis is the active phase of an initially motoric conflict that subsequently caused a self-devaluation conflict with muscle atrophy. This motor conflict must therefore always be resolved.

Chorea Huntington is similar to Parkinson’s disease, a hanging cure for a motor conflict.

If a motor conflict is resolved, the epileptic seizure occurs in the crisis. If this motor conflict recurs repeatedly via a track with a subsequent resolution, then the appearance of epilepsy is present.

The grand mal seizure is the epileptic crisis following a motor conflict.

Hallux valgus is a spasticity of the musculature and the consequence is a motor conflict of withdrawal.

The cause of polio is a motor conflict affecting the muscles.
During the conflict-active phase, flaccid paralysis is present.
During the crisis, an epileptic seizure occurs. In the hanging crisis, spasticity is present.

Clubfoot is caused by spasticity of the foot muscles.

The epileptic seizure is the crisis of a motor conflict affecting the striated skeletal muscles.

Parkinson’s disease is the hanging healing of a motor conflict affecting the skeletal muscles.

Motor paralysis is the conflict-active phase of a motor conflict involving striated skeletal muscles. Each muscle has its own conflict content (not being able to defend against it, not being able to hold on …)

The cause of muscle atrophy (muscle loss) is a loss of self-esteem due to paralysis. Therefore, the motor conflict must first be resolved, then the muscle is rebuilt in the healing phase.

If the spinal cord is injured or is severed, the result is an incurable partial or complete paraplegia. It is known that nerve cells no longer divide. However, one can also suffer a motor conflict with paralysis in an accident. Such paralysis is curable, provided that this conflict can be solved.

The restless legs are a motor conflict in hanging healing concerning the leg muscles.

One must distinguish between red (warm hands) and white (cold hands) stroke. In the case of a red stroke, edema presses into the motor cortex center, causing functional disorders. In the case of a white stroke, there is an active motor conflict affecting the facial muscles, e.g. one has been made a fool.

The hiccup is the epileptic seizure of the diaphragm (striated musculature) after a solved overwhelming conflict “I run out of breath”, “I don’t breathe it anymore”.

Shivering is the crisis of a motor conflict. If a fever is present at the same time, then another SBS must have been involved in the resolution. The musculature does not cause fever.

Spasticity is the hanging crisis of a motor conflict affecting the striated muscles. There must be a track.

Scoliosis is not so much caused by the bone of the spine, but rather by its muscles. There are therefore motor conflicts concerning these muscle groups.

The pointed foot is the consequence of a hanging crisis of a motor conflict concerning the foot muscles. There must be a track.

The cramping is the epileptic crisis of a motor conflict affecting the striated skeletal muscles. How the cramping occurs indicates the exact content of the conflict.

Tetanus is the crisis (epileptic seizure) of a motor conflict affecting the striated skeletal muscles. In the case of the musculature (connective tissue), the bacteria are at work during a healing phase, but the bacteria did not trigger tetanus. The tetanus is like any other crisis, a pure brain symptom.

Convulsions are small epileptic seizures (crisis) of the striated skeletal muscles after a motor conflict. Each muscle group has its special task and thus its special conflict content. The handiness is decisive.

The diaphragmatic spasm is the epileptic crisis of the conflict “I’m running out of breath, I can’t breathe it anymore” (overstrain) concerning the striated diaphragm muscles.