Lymph-Nodes - Symptoms according to the Germanische Heilkunde®

On this page, you will find all information about the topic: Lymph Nodes 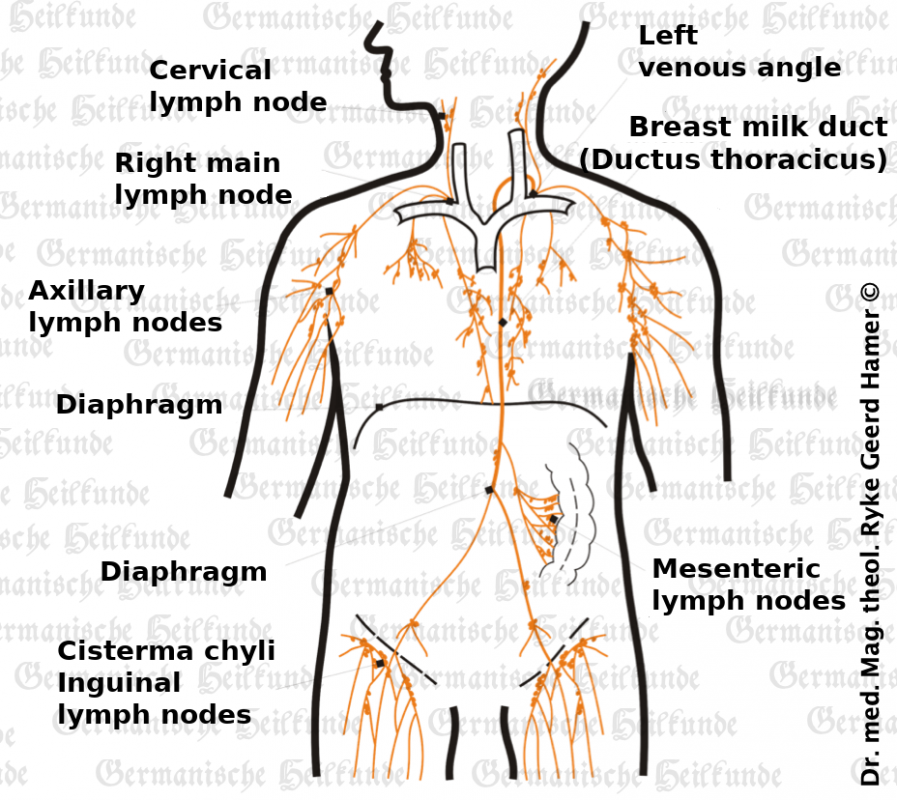 In the healing phase, after a slight decrease in self-devaluation-conflict, the necroses are replenished by the bacteria, causing swelling. In such a temporary healing phase it can lead to poor lymph drainage.

Lymph node cancer is the healing phase after a slight drop in self-devaluation. The lymph node belongs to the bone. Every lymph node (armpit, groin … left, the right side of the body) has its own self-value content, just like the bone.

In lymphoma, a distinction must be made between the lymph node (healing after a slight decrease in self-devaluation, Hodgkin’s disease) and the gill arches ganglion cyst (healing after a frontal fear conflict) and non-Hodgkin’s lymphoma. The lymph node belongs to the connective tissue, while the old gill arches are covered with squamous epithelium. However, both are symptoms of healing phases.

Spleen cancer is the healing phase after a resolved bleeding, injury conflict concerning the spleen.

Bleeding, injury conflict affects the spleen. In the conflict-active phase, the spleen necrotizes. In the healing phase, the necroses are replenished with swelling. At the end of healing, the swelling goes down again. However, the spleen remains thicker than it was before and thus has a permanent increase in function (luxury group).

Hodgkin’s disease (lymph gland cancer) is the healing phase of a slight self-devaluation-conflict, affecting the lymph nodes. The lymph node belongs thematically to the bone. Each lymph node has its own self-esteem content (see Bones).

After a resolved slight self-devaluation-conflict, the necroses of the involved lymph nodes are refilled with swelling during the vagotonic healing phase.

What can hurt in the groin? When we cut through the hip in our mind we find connective tissue – bone, cartilage, lymph nodes, muscle, blood vessels. All of them have as their cause a self-devaluation conflict of not being able to get through. The handiness is decisive. In the active phase, the connective tissue necrotizes, and in the healing phase, it is replenished with the help of bacteria and under the swelling. This swelling hurts. So pain in the groin means a solved SDC, now you have been able to assert yourself!