On this page, you will find all the information about the topic: Lungs 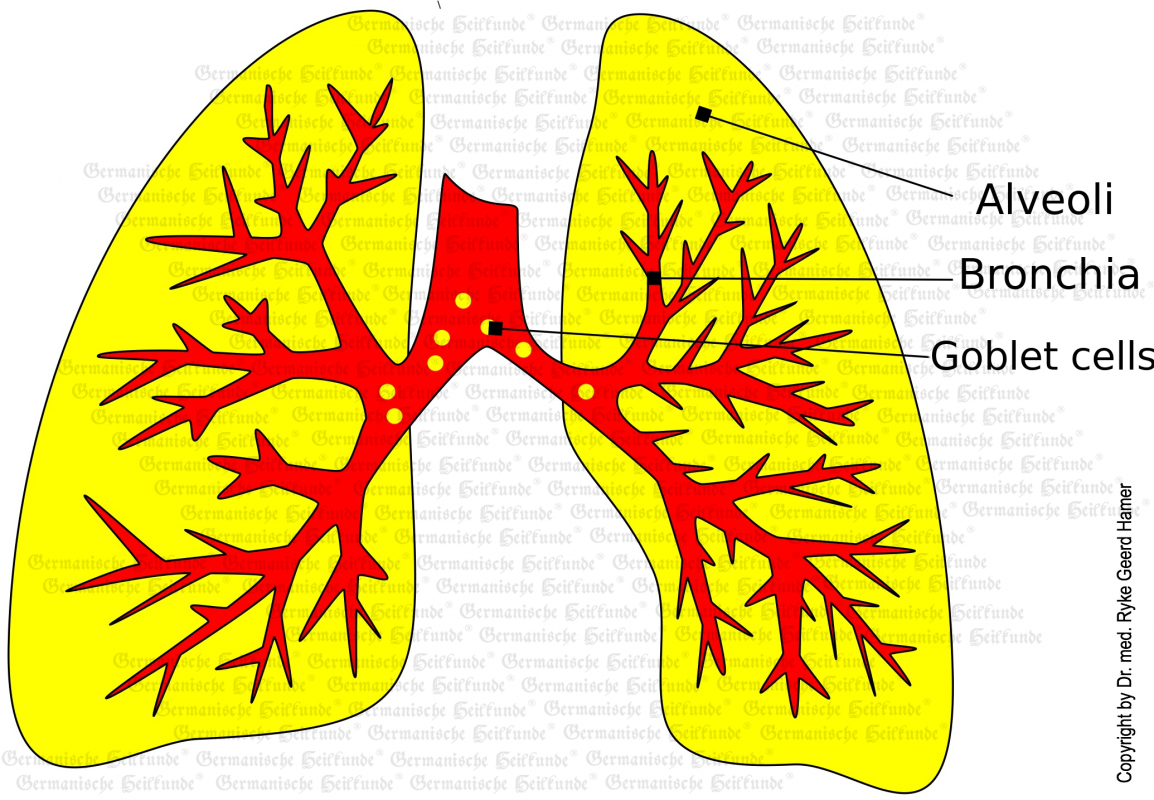 Blood – as bad as it looks – is always a sign of the healing phase. There are two reasons for coughing up blood: in the tuberculous healing after a pulmonary carcinoma (fear of death) or in the healing phase of the bronchial mucosa (territorial fear, fear of fright conflict).

In Bronchial Asthma, the motor bronchial relay is active in crisis (epileptic seizure), and in the left vis a vis territory area somewhere a Hamer Focus is active. For the time of the crisis, there is also a schizophrenic territorial constellation.

Bronchial Cancer is a curative swelling of the bronchial mucosa (squamous epithelium, territorial fear or fright anxiety conflict), which can lead to the closure of the bronchi (deficient ventilation of the lungs). In the end, this healing swelling subsides and the lungs are ventilated again.

Chronic shortness of breath COPD can originate from the pulmonary alveoli (fear of death) or from the bronchial tubes ( territorial fear, fear-fright conflict).

A cavern is the scarred cavity, often lined with calcium, which remains as a result of tuberculous healing by decomposition of the preceding tumor. In the lung (cleared lung round cancer) these caverns remain open due to permanent breathing. In the breast (cleared glandular carcinoma) these cavities collapse due to the dead load of the breast.

Pulmonary emphysema is caused by a constantly recurring fear of death conflict affecting the pulmonary alveoli. In such a poly-cyclic course, the original tissue melts away.

Pneumonia is the healing phase after a female scare-fright conflict or male fear of territory, concerning the bronchial mucosa.

With the diagnosis “lung cancer” you have to ask! Is it the alveolar lung cancer (conflict-active fear of death) or is it the bronchial carcinoma (the healing phase after female scare-fright or male territorial fear, concerning the bronchial mucosa?

Lung tuberculosis is the healing phase after fear of death concerning the pulmonary alveoli.

Cystic Fibrosis Of The Bronchi

Tracheitis can originate from the larynx or the bronchi. In both cases, the cause would be a female fear-fright or a male fear of territory conflict. The “stimulus” is nothing else than the track (allergy), which was programmed into the DHS at that time.

Sarcoidosis Of The Lung

Sarcoidosis of the lung is caused by a fear of death (pulmonary alveoli) in a hanging cure. Tuberculous hanging healings lead to a reduction of the initial tissue. In sarcoidosis, therefore, there must be a track that points back to this fear of death conflict.

During the healing phase of the bronchial mucosa, mucus is formed which must be coughed up.

If both brain relays, laryngeal, and bronchial muscles, simultaneously produce epileptic seizures, the status asthmaticus is present. This can be dangerous.