Liver - Symptoms according to Germanische Heilkunde®

On this page, you will find all the information about the topic: Liver

In the liver’s case, we have the liver parenchyma with liver cancer (starvation – brainstem). Many liver rounds mean starvation around itself, and a single liver round means starvation around someone else (or animal). On the other hand, the hepatic ducts are lined with squamous epithelium and are controlled from the territorial area of the cerebral cortex. 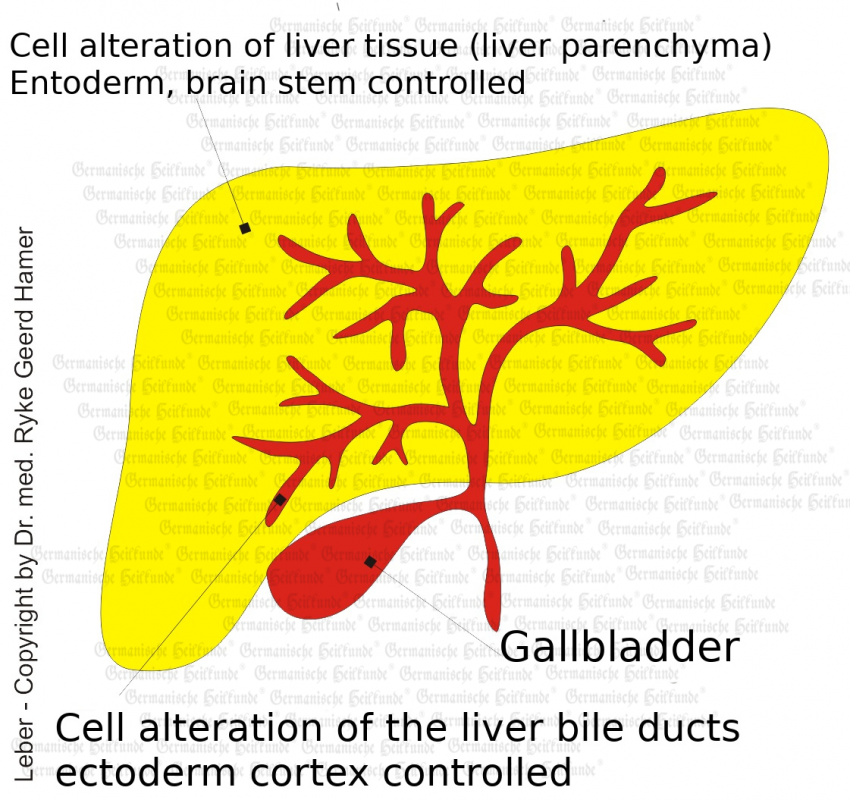 Fatty Liver is present at the beginning of the healing phase of liver carcinoma. It is therefore the healing or hanging healing of a starvation conflict.

Biliary colic is the crisis of the squamous epithelium that lines the liver, the gall bladder, and the excretory duct of the pancreas. This squamous epithelium belongs to the so-called pharyngeal mucosal scheme and hurts in the active phase and especially strongly in crisis.

In the crisis of the liver bile ducts (squamous epithelium) we have the absence and hypoglycemia (= hepatic coma). The gamma-GT increases when the crisis has already subsided.

Liver coma is the crisis of the liver bile ducts (male territorial anger or female identity conflict) and is actually an absence + hypoglycemia.

Liver metastases have nothing to do with tingling crawling cells, as conventional medicine believes, but are the consequences of a starvation conflict, typically after the diagnosis of colon cancer.

In the healing phase of liver cancer (starvation), the now no longer needed liver carcinoma is decomposed by the associated microbes (fungi) in a tubercular manner. Every tuberculosis is accompanied by night sweat.

Liver cirrhosis can occur as a residual condition of the healing phase in the two special programs of the liver parenchyma (liver cancer, starvation) and the liver bile ducts (jaundice, male territorial anger, or female identity conflict).

The fainting seizure can be the epileptic seizure of the left myocardium, i.e. a resolved overwhelming conflict. It could also be the crisis of the liver bile ducts (hypoglycemia).

Typhoid fever is the hanging cure of a starvation conflict affecting the liver, thus liver TB.