Larynx - Symptoms according to Germanische Heilkunde®

On this page, you will find all information about the topic: Larynx

The larynx and vocal cords are squamous and are controlled from the territorial area. 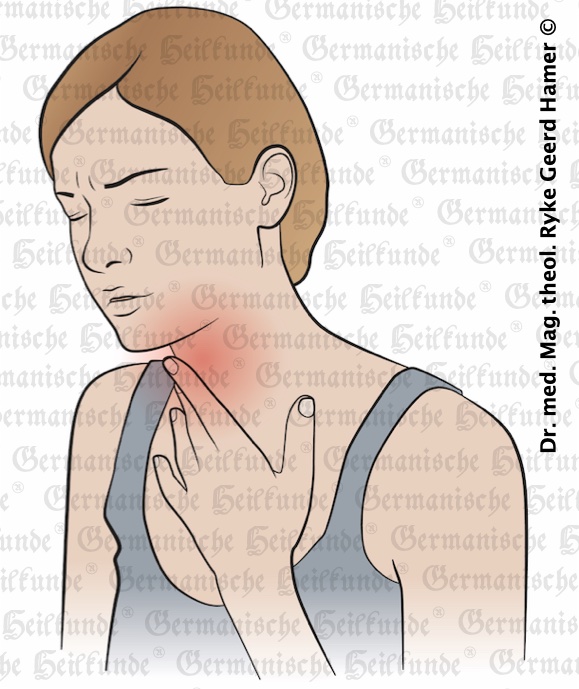 The hoarseness is the healing phase after a female fright or male territorial fear conflict concerning the larynx. The conflict also has the content: one is tongue-tied.

In laryngeal asthma, the motor laryngeal relay is active in crisis (epileptic seizure) and in the right vis a vis area somewhere a Hamer Focus (HH). For the time of the crisis, there is also a schizophrenic territorial constellation.

Laryngeal cough is the healing phase after a female scare-fright conflict or a male fear of territory conflict, concerning the laryngeal mucosa.

Scratching in the larynx is the healing phase after a female scare-fright conflict or male fear of territory conflict, concerning the laryngeal mucosa.

Laryngeal cancer is the healing phase after a female scare-fright conflict or male territorial fear conflict, concerning the laryngeal mucosa.

Laryngeal swelling is the healing phase after a female scare-fright conflict or male territorial fear conflict, concerning the laryngeal mucosa.

The croup or croup cough develops in the healing phase of the laryngeal mucosa. The swelling of the mucous membrane causes a barking cough and whistling when inhaled. The cause is a solved female fear – fright or male fear of territory conflict.

Tracheitis can originate from the larynx or the bronchi. In both cases, the cause would be a female fear-fright or a male fear of territory conflict. The “stimulus” is nothing else than the track (allergy), which was programmed into the DHS at that time.

In the healing phase after fear fright or speechlessness conflict, the voice can sound scratchy or even fail completely.

Speechlessness is an active fear-fright, territorial fear conflict, depending on the handiness and hormone situation (territorial area conflict). But it could also be the crisis (brain symptom).

The speech disorder is an active conflict in the linguistic center, i.e. fear-fright, territorial fear conflict.

The lingual center (Broca center) is located in the relay of the larynx and thus in the area where not only the handiness but also the hormone situation is decisive. The conflict has something to do with the language like being speechless, speech devious, mouth forbidden…

If both brain relays, laryngeal, and bronchial muscles, simultaneously produce epileptic seizures, the status asthmaticus is present. This can be dangerous.

The vocal cord polyps develop in hanging healing of a speechlessness conflict (fear-fright, territorial fear) concerning the squamous epithelium of the vocal cords. We see a similar process of development with the warts of the outer skin.

Stuttering is the crisis (tonic-clonic) of the laryngeal muscle relay and in the vis a vis territory area it is an arbitrary active conflict. For the time of the crisis, there is also a schizophrenic territorial constellation.

The dry cough is the healing phase of the larynx (resolved territorial anxiety, fear-fright-conflict).