Intestine - Symptoms according to the Germanische Heilkunde®

On this page, you will find all the information about the topic: Intestine

In the intestine case, the glandular tissue (intestinal villi, brainstem controlled) and the smooth muscle (midbrain) are present. Each intestinal section has its conflict content (morsel, anger). The beginning (first section of the duodenum) and the end (12cm up the rectum) is lined with squamous epithelium and is controlled from the cerebral cortex’s territorial area. 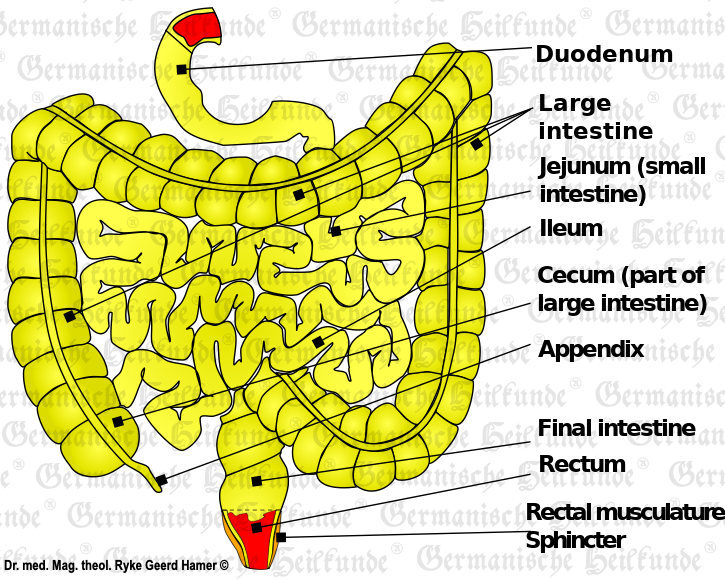 The stomach cramp (diarrhea) is the healing phase of an “indigestible morsel” affecting the smooth muscles of the intestine.

The navel cancer has the conflict content: not being able to excrete something (cloaca).

The flatulence develops in the conflict-active phase of an indigestible morsel (anger), affecting the smooth muscles of the intestine.

The appendix rupture can happen in the healing phase after an “ugly anger”, if the conflict mass was accordingly large.

Appendicitis is the healing phase after an “ugly anger” (child experiences marital quarrel).

Appendix cancer is the active phase of an “ugly anger conflict”.

Blood And Mucus In The Feces

During the healing phase of the small intestine (anger with the aspect of starvation) blood and mucus fragments go off with it.

In Diarrhea with Vomiting, the lower and upper small intestine is in healing (indigestion with the aspect of starvation).

Colitis ulcerosa is the hanging healing of the conflict “one is unjustifiably accused of something” (an anger conflict).

Colon Cancer is the conflict-active phase of an “indigestible morsel”.

Intestinal paralysis (paralytic ileus) is the conflict-active phase or crisis of an “indigestible morsel”.

The intestinal polyp develops in the active phase of an indigestible morsel conflict (anger).

There is the flat-growing (thickening of the intestinal wall) and the cauliflower-like (polyp) growing intestinal cancer. The biological sense always lies in the conflict-active phase. Flat-growing: being able to absorb better. Cauliflower-like: can digest better. It is and remains the morsel conflict (anger).

Colon Cancer is the active phase of an ugly anger conflict, one is unjustifiably accused of something.

Diverticula are bulges, e.g. at the end of the healing phase of a tubercularly degraded colon cancer.

The cause of Cancer of the Small Intestine is an indigestible morsel with the aspect of starvation.

Diarrhea is the healing phase of an “indigestible morsel conflict”

In the active phase of an ugly morsel conflict, epiploon cancer develops.

Colloquially known as hemorrhoids, the rectal squamous epithelial mucosa’s swelling is the healing phase of a female identity conflict or male territorial anger conflict. Often this type of hemorrhoid hangs out of the anus in a grape shape. The second type of hemorrhoids is not visible, only palpable. This hemorrhoid is the active phase of a vile shit conflict, affecting the underlying old intestinal mucosa.

Lactose intolerance is an allergy to milk, whereby the intestines usually react. With DHS (anger conflict, intestine) the brain has stored milk as a track.

Diarrhea (massive bowel movements) is the healing phase after an anger conflict, concerning the intestine. If the sphincter musculature (territory marking) is also affected, then it can easily go into the pants.

The intestine has as conflict content the “indigestible anger (morsel)”. The further towards the rectum, the more insidious is this “shit conflict”.

The cause of Crohn’s disease is the hanging healing of an “indigestible trouble with the aspect of starvation” affecting the small intestine.

In rectal spasms, the striated sphincter reacts with an epileptic seizure. The cause is a resolved territorial marking conflict (conflict of location determination).

Constipation is the active phase of a morsel conflict (anger) concerning the smooth muscles of the intestine. In the healing phase, it causes colic (diarrhea).

The duodenal ulcer is located in the ⅓ of the duodenum seen from the stomach. The small curvature of the stomach and the ⅓ of the duodenum is lined with squamous epithelium. The cause is a male territorial anger or a female identity conflict. This squamous epithelium belongs to the pharyngeal mucosa scheme and hurts in the active phase (ulcer) and in crisis.

Duodenal cancer is the active phase of an indigestible morsel (anger) concerning the glandular tissue of the duodenum.