Breast - Symptoms according to the Germanische Heilkunde®

A distinction must be made between the mammary glands (care, dispute, nest conflict) and the mammary ducts (separation conflict). Typical subsequent conflicts are disfigurement due to the surgery (melanoma). And due to the diagnosis, self-value collapses at the breast’s level on the spine (osteolysis). 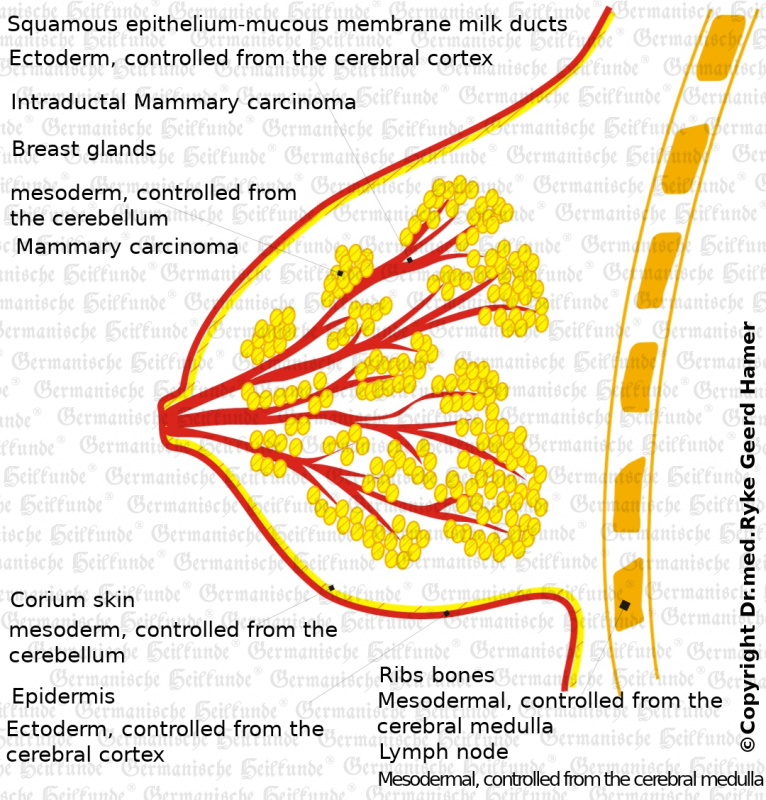 Rotting Off The Breast

In a hanging cure, a mamma-ca (glandular tissue, worry/conflict) can cause the breast to rot away. The breast virtually amputates itself. That would not be dangerous in and of itself. However, it often leads to the vicious circle of a melanoma (defilement, disfigurement) and the patient exhausts.

There are two types of Breast Cancer. The mammary gland Ca (active worry/conflict or argument/conflict) and the milk duct Ca (resolved separation conflict). The more frequent cancers (conventional medicine) are those concerning the milk ducts.

An increased cell count (dead cells) in the milk of farm animals indicates tuberculous healing or hanging healing of the mammary glands.

The fibroadenoma is the residual state of a tubercularly degraded mammary gland carcinoma, the scarred cavern.

In hanging healing of the mammary glands (worry, dispute conflict), the initial tissue melts away, and the breast feels like an empty balloon.

Calcification In The Breast

Calcification in the breast develops due to a tuberculous decomposition of a mammary gland carcinoma (worry, argument conflict) during the healing phase and remains even after the end of the healing phase. These calcifications are absolutely harmless.

A cavern is the scarred cavity, often lined with calcium, which remains as a result of tuberculous healing by decomposition of the preceding tumor. In the lung (cleared lung round cancer) these caverns remain open due to permanent breathing. In the breast (cleared glandular carcinoma) these cavities collapse due to the dead load of the breast.

Lump In The Breast

The compact, well-delimited lump in the breast is the conflict-active phase of care-, quarrel- or nest-conflict concerning the milk glands.

An open breast can develop during the tubercular healing phase of a mammary gland carcinoma (care, conflict). A very common secondary conflict is a disfigurement of the dermis.

The firm breasts are a so-called SYNDROM. The mammary glands (worry, argument conflict) are active in the healing phase (or hanging healing) with tuberculous decomposition and the kidney collection tubes (refugee conflict) with cell reproduction and active water storage.

Ray fungus with animals has something to do with SBS at the breast (milk glands, milk ducts).

The traction in the breast points to active care, dispute-conflict concerning the milk-producing glands.

Cyst In The Breast

The cyst in the breast (scarred cavity) is the end of the tuberculous (normal) healing phase of a worry or argument conflict concerning the mammary glands. The cyst is scar tissue with calcification.

There are two types of Breast Cancer. The mammary gland Ca (active worry/conflict or argument/conflict) and the milk duct Ca (resolved separation conflict). The more frequent cancers (conventional medicine) are those concerning the milk ducts.

Dent In The Breast

The squamous epithelium of the mammary ducts may contract in the conflict-active phase, resulting in a dent in the breast.

Udder inflammation is the healing phase of a separation conflict associated with the udder (in women: mastitis).

Mastitis is the healing phase after a separation conflict, concerning the milk ducts.

The quarter pain in cows is mastitis in human females. The cause is a resolved separation conflict associated with the mammal, concerning the squamous epithelium of the milk ducts. Typical conflict in the cow, when the calf is taken away and she gets over it.