Brain - Symptoms according to Germanische Heilkunde®

On this page, you will find all information about the topic: Brain 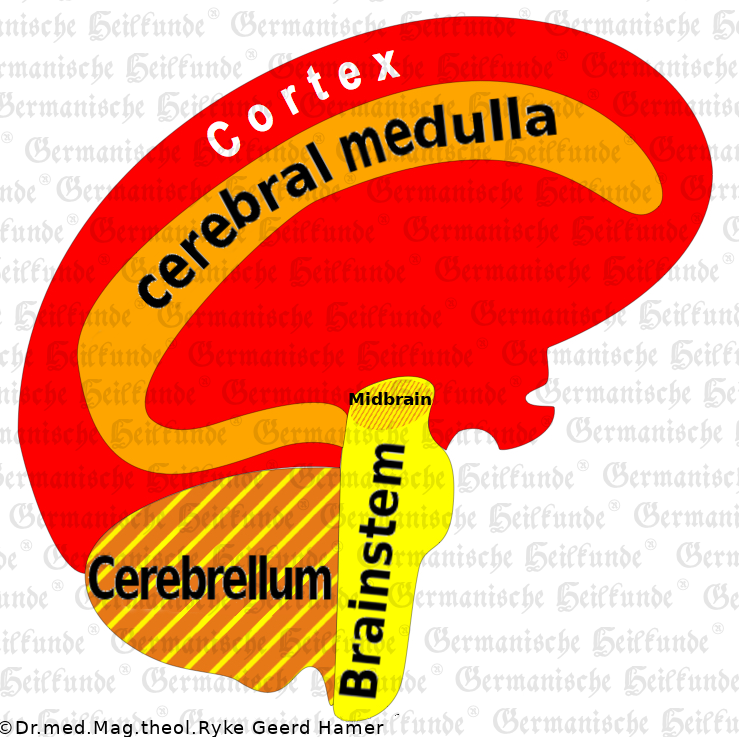 In the healing phase, after an auditory morsel conflict (a certain information that one wants to hear or not want to hear), one has the obligatory edema in the brainstem. This edema is diagnosed in conventional medicine as acoustic neuroma.

To the old-brain belong the brain stem, midbrain, and cerebellum. All old-brain-controlled SBS makes a cell proliferation in the conflict-active phase and a tubercular degradation in the healing phase.

There are no brain tumors in the sense of nerve cell division. Whether one calls this brain tumor glioblastoma, astrocytoma, or meningioma, it is always about edema or glial deposits in the brain. Only the brain pressure can be dangerous.

The cerebellum controls the MESODERM OLD (yellow/orange group, gland-like tissue). In the active phase, cell proliferation and functional amplification are also the biological sense. In the healing phase, the now no longer needed cell+ is decomposed tuberculously, provided that the associated microbes – the fungal bacteria – are present. The handedness is decisive.

Cerebellar shrinkage is the result of recurring “attack on the heart” conflicts. The brain relay associated with the pericardium is located in the middle of the cerebellum.

In the case of a brain CT, conventional medicine uses a contrast agent as standard, so that the edema of the healing phase can be more easily recognized in the brain relay. If this is the case, the diagnosis is a brain tumor. To spare the patient this nonsensical diagnosis (nerve cells neither multiply nor shrink), Germanische Heilkunde advises against it. Edema can be easily detected even without a contrast agent. The contrast agent is also not without danger. There is an anaphylactic shock, from which many patients have already died. The best way you declare that you are allergic to the contrast agent.

The cause of headaches can be manifold: edema in the brain, rheumatism of the periosteum, trigeminal neuralgia, migraine

The cerebral medulla controls the NEW MESODERM (orange group, connective tissue). This is a matter of self-devaluation. In the active phase, the tissue necrotizes. This conflict must be resolved, otherwise, the connective tissue will dissolve. In the healing phase, the bacteria help to replenish these necroses under the swelling. At the end of the healing phase, the swelling goes down, but the connective tissue remains stronger than before. The biological sense of these special programs is in this permanent strengthening of function. The left cerebral medulla controls the right side of the organ and vice versa (there are exceptions!)

The midbrain is located between the old and new brain and controls the old smooth muscle. The conflict content is the MORSEL and “right in” and “left out” (see embryonic development). There are cell multiplication and functional amplification in the active phase, which is also the biological sense. In the healing phase, this cell multiplication remains or is not degraded by microbes. The handedness has no meaning. The left midbrain controls the left organ side, and the right midbrain controls the right organ side (no crossing from the brain to organ, see embryonic graphic development).

The neu-brain (cerebrum) includes the cerebral medulla and the cerebral cortex. During the conflict-active phase, the neu-brain-controlled SBSs cause either cell loss or loss of function.

The brain stem is the oldest part of the brain in terms of developmental history and controls the glandular tissue (entoderm). Here it is always about the morsel! The right side of the brain stem tries to absorb the good morsel and the left side tries to get rid of the bad morsel. The handiness did not play a role at that time.

Cyst In The Cerebral Medulla

The cyst in the cerebral medulla (brain) indicates a polycyclic conflict course. At the end of the healing phase, the brain relay scars. If this happens, again and again, a cyst forms, which may even rupture.