On this page you will find all the information you need on the topic: Small Intestine-Ca (lower part)

Conflict of not being able to digest a morsel, indigestible anger, usually with starvation anxiety in the broadest sense.

Example: A master hairdresser has to close her second store several times temporarily, later permanently, because her best employees always left her and switched to the competition, despite her previous assurances.

HH in the brainstem (pons), ventro-lateral (inferior-lateral) on the left side

The small intestine has grown developmentally very rapidly in a short time. Therefore, the flat-growing small intestine adeno-Ca of the resorptive grade is widely spaced and consists of only a few intestinal cylindrical epithelial-Ca layers. However, the carcinomas may become progressively thicker at the end of the ileum and almost reach cauliflower shape.

Bloody, tuberculous-caseating, necrotizing (if TBC mycobacteria present) rejection, so-called “plaques,” fragile adeno-Ca plates, with mucus. However, also thick parts in the so-called “Ileitisterminalis” the so-called “M. Crohn.” The shedding of bloody mucus and mucus-producing cylinder epithelium, which we have so far taken to be a disease (Crohn’s disease), has in each case been only the healing phase (with or without TBC). In which we were asymptomatic and believed ourselves healthy, the conflict-active phase was actually the growth of a tumor.

To be able to better absorb (=absorb) a morsel that has already been taken. 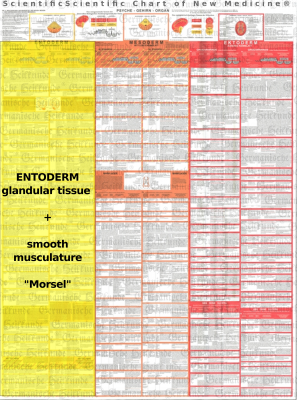 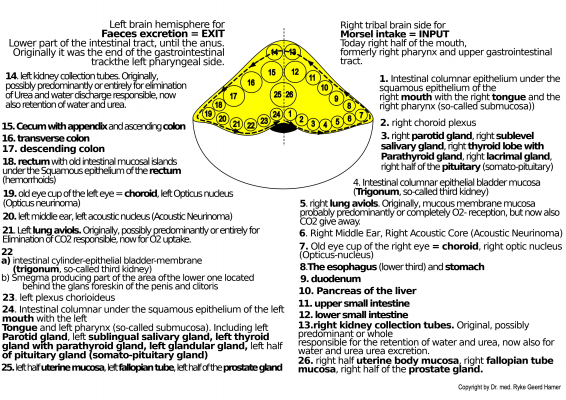