The German Bundestag has discussed your petition and passed a resolution on 17.05.01:

To close the petition procedure.

It thus follows the Petitions Committee’s decision recommendation ( BT Printed Paper 14/5978), the grounds for which are attached.

With the decision of the German Bundestag, the petition procedure is closed.

To close the petition process.

The petitioner complains about the AIDS policy of the federal government and about federal judicial authorities that do not prevent it.

In detail, the petitioner submits that it is known to the parties involved that in connection with what is called AIDS, a virus has never been detected according to the standard rules of virology. That about the scientific document of the virus, the photo of the isolated HI virus, lies are persistently told at all levels of government. That, consequently, meaningful HIV antibody tests cannot be scientifically and technically possible. Through the suppression of actual facts, consent to chemotherapy (cocktails AZT and others) is obtained, which as a permanent therapy is inevitably fatal.

For the petitioner’s further submission, reference is made to the contents of the file.

The result of the parliamentary examination can be summarized as follows:

The petitioner’s objections are based on a minority opinion arguing that HIV in cell cultures does not represent viruses but virus-like protein particles that can occur in laboratory cell lines. According to the Federal Ministry of Health (BMG), direct electron microscopic detection of HIV in plasma or serum of patients has not been performed. This is due to technical reasons, as the visualization of viruses on the electron microscope requires relatively high particle concentrations. In the plasma or serum of patients, such high concentrations are reached most in the so-called burst phase of the primary infection or the advanced AIDS stage. Such detection would therefore require close cooperation between attentive clinicians and virologists. Since the question (direct detection in plasma or serum) has no scientific relevance except for the petitioner, there are no intensive efforts in this direction.

The prevailing opinion in medical science is that it is an infectious disease.

The petitioner’s allegation that the federal government’s AIDS policy promotes the killing of certain segments of the population is strongly rejected.

There is no evidence of misconduct on the part of the federal authorities.

Against this background, the Committee is unable to support the petition. It is therefore recommended that the petition procedure be closed. 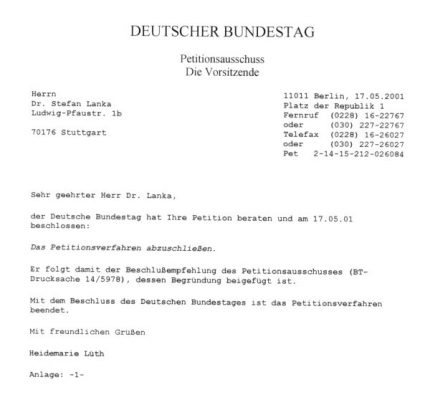 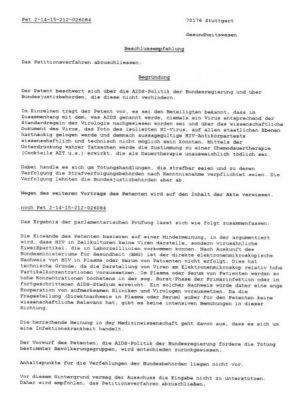 Similar to the DOGMA of the “immaculate conception” in the church.