Epilepsy in Toddler and mein Studentenmaedchen – Testimonial of the Germanische Heilkunde

Epilepsy after 8 weeks with “Mein Studentenmaedchen” – as good as cured

to the lovely testimonials on this site about epilepsy, we would like to add ours and tell you about our experience with our 3-year-old son.

It was in 2014 when we first heard about it. The term Germanische Heilkunde was entirely unknown to us young parents at that time.

Our son was three years old then and had epilepsy for 1.5 years. Up to this point, we had already tried several therapies and remedies, which all had their sometimes better. Sometimes worse effects, but had one thing in common – unfortunately did not bring the hoped-for permanent improvement of the convulsions as we parents had so ardently desired.

My husband and I had slowly reached the point where we began to doubt our efforts and considerations. From the beginning, we decided not to have further inpatient examinations, including MRI and nerve fluid sampling under general anesthesia, despite the allegedly very alarming EEG and the extremely urgent recommendation of the head physician at the children’s hospital. With our request for one day to think it over, we escaped the pull of the conventional doctors in the hospital and were allowed to go home.

At that time, we did not know anything about the Germanische Heilkunde. Still, we wanted to try all possible “alternatives” before subjecting our son to an examination or therapy that might paralyze him, e.g., by removing nerve fluid or cause other damage to the brain, the consequences of which we could not foresee. Then preferably a lifetime of twitching, which did not seem to bother our son himself and was only for us outsiders to be seen as “bad,” namely with eye-rolling and fixed gaze upwards and twitching of the upper body.

On this day of reflection, we searched the internet for alternative possibilities and came across a report of experience where epilepsy was cured with classical homeopathy. We were hopeful and had made our decision, which we delivered to the head physician of the children’s hospital the next day. We said that we were aware of our responsibility and that we would turn to the children’s hospital we trusted – a white lie, but one that probably saved us a lot of trouble and discussion at the time. The head physician emphasized the advantages and experience of his hospital with infantile epilepsy and said that he would be pleased if we would reconsider our decision.

So we went the way of classical homeopathy. This path brought us many new and precious insights and strengthened our critical questioning of all possible conventional medical therapies and treatments of diseases.

But after we tried with our therapist for more than a year to find the right homeopathic remedy for our son, which improved his twitching – at that time more than 10-20 times a day of 25-40 seconds duration each – and a new change of remedy again brought no long-term improvement of the twitching. I began again to research on the Internet and by chance came across the film on youtube: “The 5 biological laws of nature”, which made me curious. I continued reading and found Dr. Hamer’s “Magic Melody.” What I read made me very curious, and I decided to test the pure effect of the melody to stop the homeopathic remedy completely and ran “Mein Studentenmädchen” for the first time on the night of 1/16/15. At the same time, I ordered two books by Dr. Hamer to dive deeper into the matter of GHK.

The very next day, we could already observe how our son’s spit continuously ran out of his mouth, and the twitching occurred somewhat less frequently. The next days were characterized by diarrhea, increased temperature, intense cough, much thirst at night, sizeable bloated belly, and many tears. In the 2nd-3rd week, the twitching came again in an intensified form with the most extended duration of 90 sec. I tried to calm myself and my husband down and continue as before, although the increase made us a little afraid of what could still come, and we asked ourselves whether we should really go through with it or get advice somewhere else.

At that time, my husband and I were utterly alone in our circle of family and friends with our convictions and had no one with whom we could talk about what was happening to our son and who would have supported us in our approach. It was not easy. But the feeling that the path we had taken was the right one did not let me go, and so we decided to go through with it and waited anxiously for the peak of the healing phase.

Then in the 4th-6th week, the twitches reduced drastically to 1-3 times a day. Our son had to pee often and seemed a little more balanced. Then came the 7th week, which took the most out of us – I’ll say it was a “crying week.” Our son cried and screamed in the afternoons after kindergarten, as we had never experienced before. No matter what we tried, he was not to calm down or cheer up with anything. But since he liked going to kindergarten, I let him go anyway with a queasy feeling in my stomach and informed the kindergarten teachers about his conspicuousness at home and asked for daily feedback. As a backup, they asked me to write a statement about his current condition, what to do in case of an emergency, who was the doctor we trusted, what exact tasks the kindergarten teachers had to do in case of an emergency…. Since we have a very good and open relationship with our son’s educators and also knew that both did not reject alternative therapies, we are very grateful. Fortunately, no obstacles were put in our way in this respect, and our “waiting” for the peak of the healing phase was accepted.

And then came the 8th week – and what can I say, it was the greatest gift we as parents longed for – the twitching of the upper body with eye-rolling gone or only recognizable as 1-3 second quick absences, which our son once commented like this: “Oh, that scared me.” Whereas before, he couldn’t remember anything that was going on with him, now he consciously perceives it and even comments on it.

It’s just insane! I still don’t believe it. But it is true!

Dear Dr. Hamer, we are so infinitely grateful to you and bow deeply to you. Thank you so much that your exist and that you have shown us such a beautiful and gentle healing path! We are already looking forward to your new online webinar with Mr. Pilhar and would like to learn a lot more from you!

There really can’t be a any softer therapy than Germanische Heilkunde with “Mein Studentenmädchen” – and it’s free of charge! 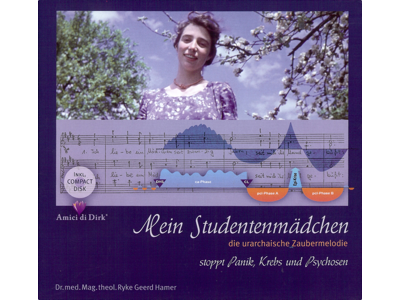