I, re-woman 39yrs, suffered an SDC on my right knee due to an upcoming car purchase.

My old car had to be taken to the workshop more often, so it was time for a new car. Cars, buying a car – a subject with which I am not at all familiar and which I had no desire to do.

My father, as a pensioner, had a lot of time on his hands and offered to advise me, go with me to car dealerships, etc. He also sometimes went to a car dealership without me. He also went to car dealerships without me and collected brochures that I could look at. He said that I couldn’t get around dealing with all the data on the cars and informing myself. And I knew myself that I probably had to do that now.

Shortly after we had started the car thing, he fell seriously ill and was very busy with himself for a long time.

My old car still drove, so I put off the whole thing with the information and study brochures week after week, month after month. So the topic of a new car was off the table for me for the time being.

A good year later, my father and I were sitting on the terrace chatting. In the meantime, he had recovered quite well from his illness. While we were chatting, the car topic came up suddenly and entirely unexpectedly for me. He asked me whether I had informed myself than actually meanwhile once about a new car. That was my DHS, my SDC. Because now I had more than one year time to inform me and I did not get it on the row. I probably took it sportily, because as it turned out later, my right knee was affected. The way I must have felt about it was, “I was too slow with my father to educate myself about a new car.”

I firmly resolved to tackle the matter seriously now. Unfortunately, it was still Corona lockdown. Nevertheless, I could look at the car dealer locally, what he has so on the yard. On a Sunday morning, about two and a half weeks after the conversation with my father, I did so. And sure enough, three models appealed to me, that I thought were reasonable and could imagine buying one of them. I decided to make a consultation appointment soon. The lockdown would be lifted from the coming week, after all.

Already on the way home, I felt my knee, but I did not worry about it yet. When I was back home (about 20 minutes later), it started. The knee swelled up and started to hurt terribly. It hurt so much that I could not walk properly. Only limping was still possible. Only then did I realize that I must have suffered a self-value collapse. However, I have just solved this by informing myself about a new car at the car dealer. Concretely thus I acted.

In the evening, it was hardly bearable, and I asked my sister to bring me her old crutches. On Monday, no work was possible. The pain was enormous. Only lying down and raising my leg was bearable. I was aware that the whole thing would take about two weeks. So I needed a sick note, had myself driven to the orthopedist at noon. He diagnosed me with bursitis. At least now I knew which part of the knee was affected. It hurt so bad, and I was expecting the bone. The bursa is a mild SDC. I don’t even want to know what pain you must have then with a bone healing!

The therapy: rest, elevate the leg, endure. Five days after the solution, a pus blister formed at the bottom of the kneecap. In the evening, it was as big as an upside-down Toffifee. Then at night, it also opened. This itself did not hurt. The pus did not smell at all. It oozed, stewed for about five more days. After that, I could watch how the wound healed. After two and a half weeks, the wound was healed. (See pictures)

For almost two weeks, I could only walk with crutches. For these two weeks, I was on sick leave and rested on the knee. After that, I could work again, but I still felt the knee and just did it slowly, often putting my leg up. After three weeks, I had no more pain at all, except that it pinched from time to time.

I was not afraid at any time. I knew it was a healing phase, and I just had to take it easy on the knee. Fortunately, I had the opportunity to do that. Just let it heal, ride out the pain and wait it out.

So I was active for just under three weeks and the same period of time in healing.

Fascinating how precise the body is.

I then bought a new car four weeks after resolution. I hope that this issue is now finally resolved.

Mother Nature is as precise as Swiss clockwork. As long as the conflict-active phase lasted, so long will the healing phase last. Since you know what is coming, you are not afraid and do not let yourself be afraid.

In the case of the daughter, let’s try to find out the conflict’s content and why she reacted with her partner’s knee. The bone is also our conscience. She had a bad conscience towards her father. She took it sportingly because she could have walked, but her sick father could not. It plagued her conscience until she found a suitable car two weeks later. Now, for her, her sportsmanship SDC towards her father was solved, and her conscience was free again.

During the healing phase of her bursa, the renal collecting tubes were indeed also involved. So there will have been syndrome, which also explains this violent healing phase. Did she feel left alone in the matter of buying a car? Yes, she writes it. 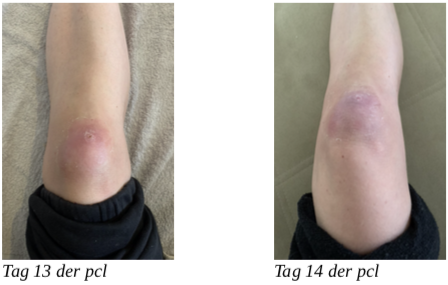