Animal testing - a disgrace for our entire age

On this page, you will find all the information you need on the topic: Animal testing - a disgrace for our entire age.

The need for people to understand the language of animals is infinitely old. From ancient times, we know from the Hittites’ religion, the Indians, the Greeks, and the Germanic tribes that they mostly had a very intimate relationship with animals. For example, they regarded their horses as their friends. This changed thoroughly when Islam and Christianity asserted themselves. Their contempt for animals ended all dialogue with animals and degraded all animals (and plants) to purely commercial articles to be exploited and sold. Humans became brutalized and impoverished in the process. The dialogue with our animals is torn off. Instead, the animals are not only denied of their soul but also their language. But every dog lover knows, for example, that a dog speaks with its whole body and is understood by its peers. It speaks with the tail, which it can raise or lower, and with which it can wag. It speaks with the fur, which it can bristle, it speaks with the gesture, the eyes, the biting of the teeth or the putting on of the ears, and it speaks with ritual actions: e.g., to submit to the victorious opponent and to offer him the throat for biting.

Of course, we can not hear this part of the “language.” Nevertheless, the dog speaks through them. And so all animals do it among themselves according to their unique kind. Because they have another language, they are not more stupid than we, but they are only different. “Oh,” said the animal enemies, “the animals can feel no pain at all, scream only from instinct, everything only reflexes. For that one can provide yes that they can scream no more”. But also with the silent torture – the animal experiments – our comrades, the animals scream.

The statistics dealing with carcinogens have generally been compiled using animal experiments. Thereby the experimental animals were denied psyche and intelligence. In reality, however, the psyche with its many so-called biological conflicts is the entrance door for developing “diseases” in humans and mammals.

In a large-scale experiment over several years, thousands of golden hamsters were smoked with cigarette smoke for life, while control animals were not smoked. It was found that none of the animals suffered from squamous cell bronchial carcinoma, none from pulmonary nodule carcinoma and that the smoked hamsters lived longer than the non-smoked control animals. But the result was hushed up or relativized: If one smoked laboratory mice (these are descendants of the house mouse), with cigarette smoke, then one found lung round foci, thus Alveolar cancer, which humans and mammals suffer from death fear conflict, with some few animals. Now they just said, “Yes, then smoking makes, if not bronchial cancer, but lung cancer.” Since then, one speaks in connection with smoking, never more of bronchial-Ca, but always lung cancer. That’s how wonderfully you can lie statistically!

The remarkable thing about it is: The animals also have a psyche like we humans do.

A golden hamster is not excited by smoke because it usually does nothing to him in his habitat. After all, he lives below the surface in caves, so he has not developed a panic code.

A mouse, however, can get excited by the smell of fire or cigarette smoke. If a roof were on fire in the old days, all the mice would run out of the house in a flash before anyone noticed anything.  A mouse smells the fire because they have a fine nose and an innate panic code. They can suffer a DHS (conflict shock) speak: a death fear conflict with Alveolar-Ca by the smoking quite.

Another example: American researchers injected rats, whose most sensitive organ is their nose, with a formaldehyde solution used for disinfection and around which the animals usually give a wide berth, in a thousandfold concentration into their noses several times a day for a year. Some of the poor animals, tortured in such a terrible way, obviously suffered from the DHS during this procedure and developed nasal mucosa cancer. Result of the research: “Formaldehyde is carcinogenic!”.

The same effect could have been achieved in a human experiment, in which the test subjects would have been injected with sh*t in the nose several times a day for a year in the same way. From which one would, of course, have had to strictly conclude that sh*t is carcinogenic! is carcinogenic! One will probably still remember which billion-consequences this attempt, unfortunately, together with a formaldehyde-mass-hysteria released. But that the poor rats disliked the substance and therefore suffered a nasal mucosa cancer with DHS, nobody thought of that.

You can’t do science with statistics

The so-called findings in conventional medicine have always been obtained statistically. As long as facts are added together, statistics are legal. But where facts of different series are to be statistically causally linked, the matter becomes erroneous.

Example: Shepherds in the Caucasus get little cancer. Shepherds in the Caucasus eat a lot of sheep cheese. Statistical conclusion: sheep cheese is anticarcinogenic, prevents cancer. (Scientific work from the Department of Cancer Prophylaxis of the University of Heidelberg/Mannheim). Of course, there are no statistics from the point of view of Germanische Heilkunde® so far. Here, completely different explanations would come into play, which, on top of that, could also be proven razor-sharp.

If one wants to compare the psyche of animals and humans, then one must imagine that in our large computer brain, for different life situations, completely different conflicts are coded. If we put a human being into a car, he feels well there. If we lock an eagle into a car, he gets fear of death, which the human being would also get if we put him into an eagle’s nest. Although the fear of death, as a result, is comparable with each other, it arises with different living beings with completely different life situations. As a result, each living being’s individual character and psyche must be taken into account to be able to judge a possible conflict situation.

Do a CT of the lungs in a hundred female sausage dogs with mammary-Ca and a hundred human females with mammary-Ca. You will find no pulmonary nodules in either contingent on the day of diagnosis. Two months later, depending on the diagnosis’s brutality, a lung nodule adeno-ca is found in a large number of human females. In bitches, on the contrary, is not a single case. Fortunately, they could not understand the diagnosis and therefore did not panic, i.e., did not get a second carcinoma. Secondary conflict means that a person gets a panic at the diagnosis (iatrogenic) and thereby suffers a DHS with a new biological conflict. We used to call these new carcinomas “metastases” in complete ignorance. However, it never gave any thought to our physicians or oncologists that animals virtually never get so-called “metastases.”

The animal still feels most of these biological conflicts real. We, humans, are often transported. For the animal, a lump it can’t swallow is really about a piece of food. On the other hand, it can be a thousand mark bill or a lottery win for humans. These biological conflicts can only be understood developmentally, as archaic conflicts in principle analogous in humans and mammals.

This shows us that we humans feel connected to dogs, horses, or cows, that we can communicate with them and feel them as “quasi-humans.” So we also suffer the same loss conflict when our human partner or our partner dog dies. For example, if a young dog is sick, the human-woman also feels a “mother-child care conflict” with breast cancer on the left, in the right-handed woman. Conversely, the animal feels the same biological conflicts around us humans, as partners, etc…

The knowledge of the conflict’s contents will finally, I hope, open a new era of the relationship between man and animal, away from the terrible understanding of the animal as a thing. This has found its terrible climax in the extermination of many rare animal species and the utterly unnecessary animal experiments, which are a disgrace for humanity. All animal experiments carried out today are only senseless cruelty to animals because the animals’ psyche is regarded as non-existent.

In recent times, so-called behavioral research gains more and more importance. After all, we learn to understand many things again, which had become entirely incomprehensible to us before. Of necessity, we have to communicate with our fellow creatures, the animals. But the thing remains piecemeal, as long as we speak, thereby only instincts and behaviors, and do not grant the animals a similar soul as ourselves. Only then can we communicate genuinely with them.

The interanimal language in humans and animals

The significant shortcoming of these communication attempts was always that we could not understand the animals’ language. But there is a language that we have in common with our animals, namely the “interanimal biological language” of our brain. In principle, we can “converse” with any horse or mouse by computer tomogram. This is because the brain’s language, precisely the interanimal language, is the same in humans and mammals, both in terms of the localization of fears and conflicts in the brain and the changes in the course of the brain.

All these things are wonderfully pre-programmed in our brain, and our brains are networked with the brains of our fellow creatures animals as well. The same is the case between animals and plants. We call these connections biological equilibrium, which wonderfully existed for millions of years until a man came into his hubris and destroyed it. Man is the only one of all living beings on earth that got out of hand and destroyed this wonderful creation. Schiller’s verses come to mind:

“It is dangerous to awaken the leu. Pernicious is the tiger’s tooth,
but the most terrible of terrors is the man in his delusion”.

I allow myself the prognosis that the animal experiments might be regarded later as a disgrace for our entire age and as a testimony of our unspeakable ignorance. 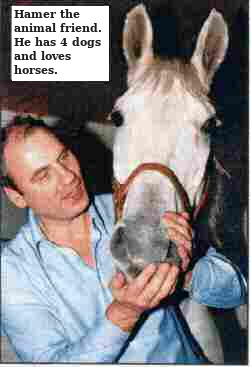 An animal owner writes… In the bloom of your life of not even one year, [...]