On this page, you will find all the information you need about the topic: 2. Biological Law of Nature

The 2nd Biological Law of Nature states that every Sensible Biological Special Program (SBS) has a healing phase, provided that a conflict resolution occurs. This healing phase usually lasts as long as the conflict was active.

Every disease of the whole medicine is a two-phase event, provided that there is a resolution of the conflict.

Of course, both phases have their Hamer Focus in the same place in the brain, but in different states: in the conflict-active phase, always with sharply marked circles, so-called shooting target configuration, and in the conflict-resolved phase, the Hamer Focus is swollen, oedematized.

One could perhaps ask why the medical profession had not long ago recognized the regularity of all diseases’ biphasic nature if it is so perfectly regular. The answer is as simple as it was difficult before: It was simply because only a part of the conflict finds a solution. If the conflict cannot be resolved, the disease remains monophasic, i.e., the individual remains in the conflict activity. Becomes more and more emaciated and finally dies of debilitation or cachexia.

Due to the DHS, the scheme shows how the normal day-night rhythm has become a permanent sympathicotonia, which lasts until the permanent vagotonia occurs due to the conflict resolution. This permanent vagotonia is interrupted quasi at the low point by the epileptic or epileptoid crisis or sympathicotonic spike, indicating the vagotonic phase’s turnover with the so-called “peeing phase,” the flushing out of a large part of the stored fluid. The sensible biological special program is only ended with the return to normality or normotonia.

The epileptoid crisis (EC) is a process that Mother Nature has rehearsed for millions of years. It occurs on all three levels simultaneously. The purpose of this crisis, which occurs at the peak of the healing phase, is for the brain edema to be squeezed out and excreted and for the patient to return to normal. We usually call an epileptic seizure with muscle spasms only a particular form of epileptic crisis, namely, after a motor conflict resolution.

Epileptoid crises, i.e., epilepsy-like crises, are basically found for each so-called disease a little differently, in all diseases. In this case, tonic-clonic seizures do not occur, as in the case of motor conflicts. Still, each biological conflict type and disease type also has its particular type of epileptoid crisis. Suppose already the healing phase, in general, was not relatively harmless in some diseases. In that case, it can even end mortally here if one is not careful.

Thus, the epileptoid crisis often confronts us with even greater clinical tasks: e.g., lysis in pneumonia, myocardial infarction after a territorial conflict, right heart infarction with pulmonary embolism, or absence after separation conflict, also diabetes, or hypoglycemia. The EC is the moment of truth! The most dangerous point is right at the end of the crisis when it becomes clear whether the epileptoid crisis was sufficient to turn the wheel. But always, the patient shall know: The vast majority manage to survive.

During the 2nd half of the healing phase – with the onset of the epileptoid crisis – harmless cerebral connective tissue, so-called glia, is stored within the brain to repair the Hamer Focus. This Hamer Focus, i.e., a more or less large white spot or area in the CT then represents the end of healing when there is no more intra- and perifocal edema.

If glia accumulations were found in the brain in the computer tomogram, which could also be easily stained with iodine contrast medium. The diagnosis was usually precise: “brain tumor”! However, brain tumors do not exist by definition because brain cells cannot divide after birth. Not even under conditions that have been misinterpreted as brain tumors so far – i.e., simply under no conditions at all. What can increase is harmless glia – the brain’s connective tissue – which has precisely the same function as our body’s connective tissue. These bright glia-dense Hamer Foci, which can be seen in the computer tomogram, repair the organism to the Hamer Foci, thus a reason for cheerfulness instead of fright or even brain surgery. 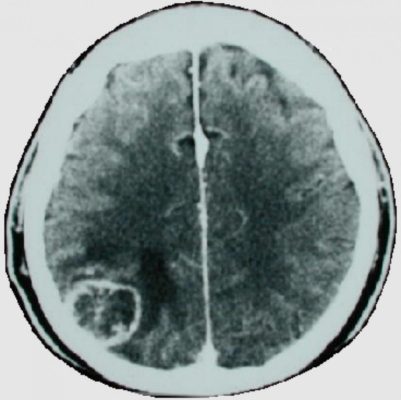 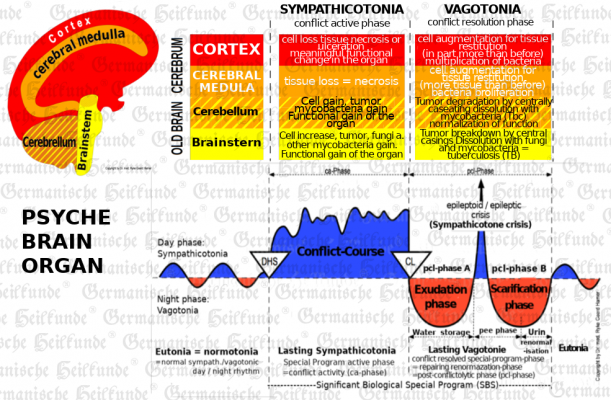 Articles & Testimonials on the Topic: 2nd Biological Law of Nature